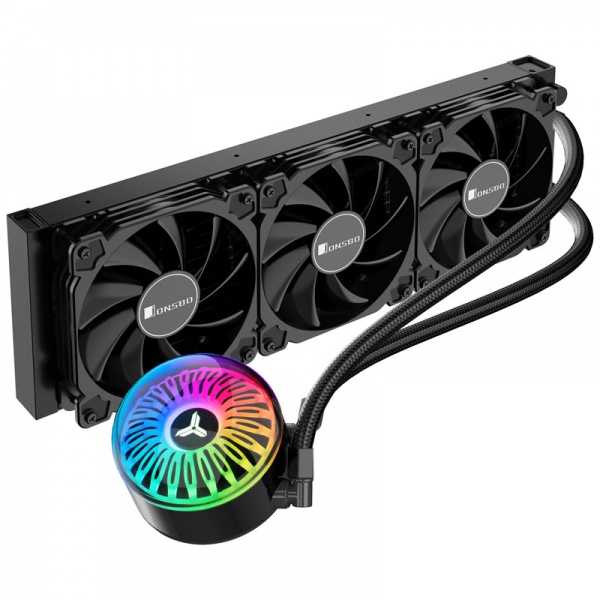 The Jonsbo Jellyfish 360 is a modern complete water cooling system with stylish lighting effects . In addition to a stylish design AIO cooling can boast a lower volume and strong cooling performance.

The features of the Jonsbo Jellyfish 360 complete water cooling at a glance:

- High compatibility with AMD and Intel

The Jonsbo Jellyfish 360 uses a triple radiator made of aluminum in a 360 mm format . The cooling capacity and the resulting volume are regulated via the speed of the supplied 120 millimeter fans which are connected to the mainboard or a suitable fan controller via a 4-pin PWM connection. The pump operates at an engine speed of 2600 rpm . As usual the pump is integrated on the back of the CPU cooling block which lies with its copper surface on the AMD or Intel processor.

Jonsbo came up with something very special in terms of design . There is stylish RGB LED lighting on the back of the cooling block which creates a fantastic effect. With this lighting it is possible to illuminate the circular LED strip in a variety of colors and effects depending on the ideas and preferences of the user which makes a lot of things on the mainboard.

If the points already listed have not yet convinced you of the Jonsbo Jellyfish 360 you should read a little further: The AIO cooling is not only extremely cooling and works relatively quietly it is also highly compatible with all modern sockets from AMD and Inteland is very easy to assemble. It is also striking that the closed water circuit does not have to be maintained of course and that the complete water cooling also fits into smaller housings in which expansive tower air coolers cannot be accommodated.

The Jellyfish 360 is delivered pre-filled. Thanks to the flexible hoses the radiator can be freely positioned on three adjacent 120 mm fan slots in the housing.